Pyongyang: A Journey in North Korea

I have never been a fan of graphic novels, but recently I read and enjoyed Guy Delisle’s Pyongyang: A Journey in North Korea

Guy Delisle worked in Pyongyang as a project manager for a French animation company in the early 2000’s. The outsourced animation projects he oversaw seemed to run themselves, and finding himself without much to do, Guy busied himself by sketching scenes of Pyongyang and documenting instances of culture shock he encountered.

Pyongyang: A Journey in North Korea

is witty, and fair (I believe) to what the experience must have been like as an expat there in the early 2000’s. His portrayal of Pyongyang’s unique buildings and architecture is spot on, and I found myself reminiscing over the many little details of Pyongyang he sketched: 50’s era Hungarian buses with star embalms, each star indicating 5,000 accident free driving miles, ladies of Pyongyang wearing socks hiked up over their nylons, and fly swatting waitresses. Even the lonely (and endangered – so I’m told) turtle in the giant fish tank at the Yanggakdo Hotel bar is a recurring character.

For North Korea watchers not fortunate to have visited the country, perhaps the most useful sketches from Pyongyang: A Journey in North Korea are of Guy’s visit to the International Friendship Exhibition, a site where interior photography is prohibited.

It’s a shame Guy never visited the Kumsusan Memorial Palace and Mausoleum; his sketches would have been quite valuable as interior photography is also prohibited there.

For fans of graphic novels, and for those waiting to properly fill out their North Korean book collection, I certainly suggest picking up Guy Delisle’s Pyongyang: A Journey in North Korea

The documentary A State of Mind

broke ground in 2003 as the first western production to be allowed unrestricted access into Pyongyang, filming in the homes of friends Pak Hyon Sun (age 13) and Kim Song Yun (age 11), and showing insights into their daily life as they trained for gymnastics performances in a run of mass games.

Their determined preparation leading to the film’s “socialist realist extravaganza” mass games finale is fascinating, but I more enjoyed the peeks into the girl’s daily lives: attempts to ditch homework, delight as one girl inherits a room when an older sister joins the army, and a father complaining about his house full of chatty woman.

The filmmakers successfully present a non judgmental viewpoint, but there is no mistaking the reality of a people’s collectivist mindset. Sacrifice of individuality to the needs of the state is the film’s major theme – which is precisely what the mass game and other mass events aim to be the ultimate representation of.

Filmed a decade ago, this is not the DPRK I am firsthand familiar with, but I still love this documentary and consider it required viewing for anyone with an interest in the country. I personally know the director, and although I haven’t met the girls from the film, I have seen behind the scenes photos of them from the production, making this extra special film for me. 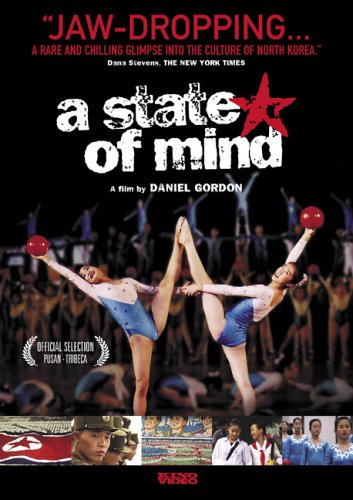 You can find A State of Mind